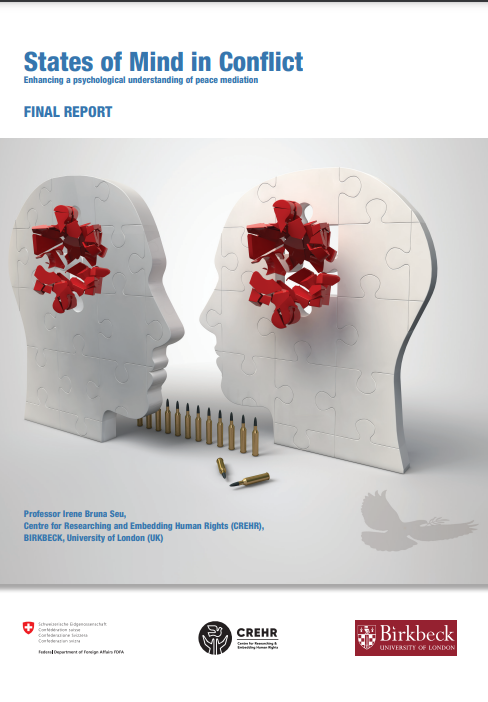 The report on States of mind in conflict (SOMIC) is clearly long overdue, necessary, and timely. I can speak on this from personal experience. Having worked in mediation, both humanitarian and political mediation over more than 45 years, I finally came to the conclusion that, in fact, what we do need is not so much a political senior adviser, because that we can get from headquarters, but someone who can help us to analyse psychologically the counterparts and our own position as well.

Ideology is no longer the key word in in geopolitics; you only need to look around to see evidence of this. This is the case not only with warlords and nonstate actors, but also with major leaders, and there are many who deserve to be analysed psychologically in order to understand their motivations, background, and their frustrations and aspirations, which are linked to some psychological trauma or  background. They don’t have a natural ideological underpinning to their position, but instead, often behind their position there is a religious mix of psychology, emotions, tribal links, and brutal aspirations. Can we analyse those without a psychologist? The bottom-line is, today is not so much about geopolitics, but what we need to be improving on is the geopsychology.

Another reason for needing a psychologist has to do with trust. We all know that one of the crucial points of a mediation is establishing trust. Indeed, I would argue that trust is the key factor. How do you do that? By simply using your manual of the perfect mediator? Or, instead, through trying to establish with the help of a  psychologist the reasons why someone on the other side of the fence is having a certain position? You may not agree with them, in fact often probably we do not agree, but if we don’t put ourselves, as they say, in their shoes, we will not be able to know how to understand their grievances. They might have an unacceptable position but, if you have done your homework through a psychologist, at least their position becomes understandable. Bottom line: we need this.

There is another argument too. You, as mediators, at least those I know and myself, are terribly lonely; believe me. Several factors contribute to this. First, mediators are given a very difficult task, which is based on cryptic instructions called the UN Security Council Resolutions, which are by definition a compromise between positions and a patchwork of various contributions from different countries plus the Secretariat. What you cannot do is think that the mandate you are given will provide you with clear instructions. Second, you are quite lonely because you are in the field and in the field the communications with headquarters are more limited. Third, because you are always ‘on the job’. As a mediator you are in a constant show with your team, to reassure them and give them a vision, with the counterparts to show assertiveness, understanding, listening, and contributing to the negotiation, coming up with creative ideas. Of course, there is the support of your team but, at the end of
the day, you are the one delivering. Then, there is the Media, which is constantly  expecting from you something that can help, in your case the mission, but also their newsworthy approach. That means calculating every word, being careful not to say the wrong one, being aware that your emotions should not prevail in your press conference, because it may then undermine your own mediation. Finally, the UN members countries of the Security Council are all expecting something from you, and you have to calibrate your message and yet at the same time come up with something that is clear and proactive.

All that puts a lot of pressure psychologically on you because, at the end of the day, it is you, on your own, that has to deal with all these pressures. So, we need a psychologist to support mediators with the enormous pressures on them because the war is going on, people are dying, and you need to deliver. How did I manage? First, I understood that I needed a psychologist or someone with the psychological competence to support the mission or to be consulted. Second, I’m fully aware that there is the danger of creeping post-traumatic stress, which affects the team, yourself and perhaps even your counterparts. You need to have someone to help you to identify that so that you can actually take that into account. I repeat, this is low intensity, creeping post-traumatic stress, which is not obviously apparent, but has an impact on the way you behave.

I will close by saying that I remember one day when I was confronted in a negotiation, and it started immediately with an attack, a huge personal attack: ‘Who are you, what do you want to bring here, you are obviously bringing a message from powerful countries, you don’t understand how we feel and what we have been suffering. You are here only because you are a well-paid UN official.” And that was the beginning of our conversation. I had gone through some training in psychology, and I remembered that this type of technique, which is instinctive in some warlords or some personalities on the other side, is meant to destabilise you and produce either a defence or a reactive aggressive reaction. Well, I learnt, and I did apply what I learnt. I just looked at the person, I did not blink, did not blush, probably did not turn white with anger, then I took 5 or 6 deep breaths, very deep breathing, with no overt reaction. Already that destabilised the other side who had finished their outburst of aggression. I then looked at him, and said “Good morning, my name is Staffan de Mistura, and I work for the UN.” Then I looked at him, breathed again and said, “Let’s start again.” By that time, the other side had already expanded, exhausted his own outburst of natural, emotional energy which was psychologically tuned in order to destabilise me. He had nothing more to add, he was ready to listen, he was ready to interact.

That was proof to me of how important it is to implement the recommendations, very valid in my opinion, that Professor Bruna Seu is making in this report. Have a good read but, in particular, let’s have a good implementation of them.