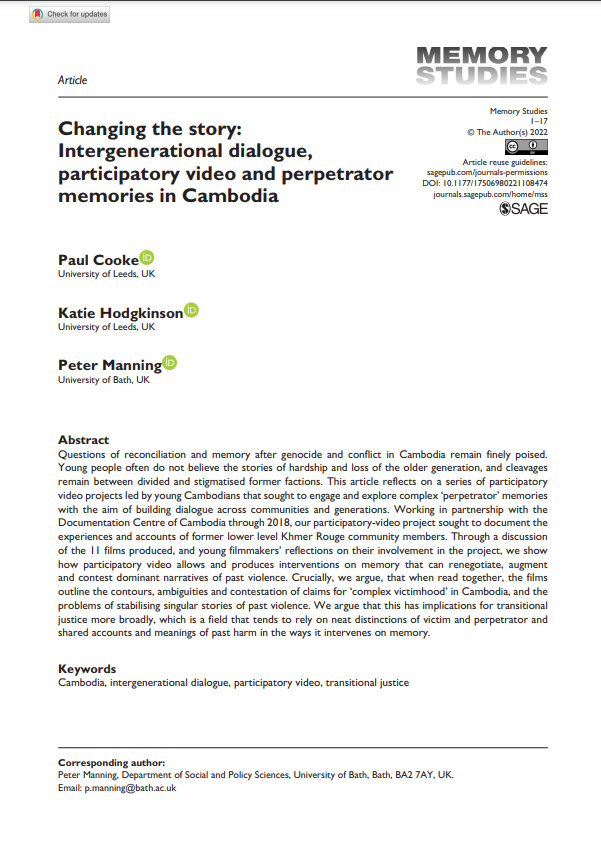 Questions of reconciliation and memory after genocide and conflict in Cambodia remain finely poised. Young people often do not believe the stories of hardship and loss of the older generation, and cleavages remain between divided and stigmatised former factions. This article reflects on a series of participatory video projects led by young Cambodians that sought to engage and explore complex ‘perpetrator’  memories with the aim of building dialogue across communities and generations. Working in partnership with the Documentation Centre of Cambodia through 2018, our participatory-video project sought to document the experiences and accounts of former lower level Khmer Rouge community members. Through a discussion of the 11 films produced, and young filmmakers’ reflections on their involvement in the project, we show how participatory video allows and produces interventions on memory that can renegotiate, augment and contest dominant narratives of past violence. Crucially, we argue, that when read together, the films outline the contours, ambiguities and contestation of claims for ‘complex victimhood’ in Cambodia, and the problems of stabilising singular stories of past violence. We argue that this has implications for transitional justice more broadly, which is a field that tends to rely on neat distinctions of victim and perpetrator and shared accounts and meanings of past harm in the ways it intervenes on memory.